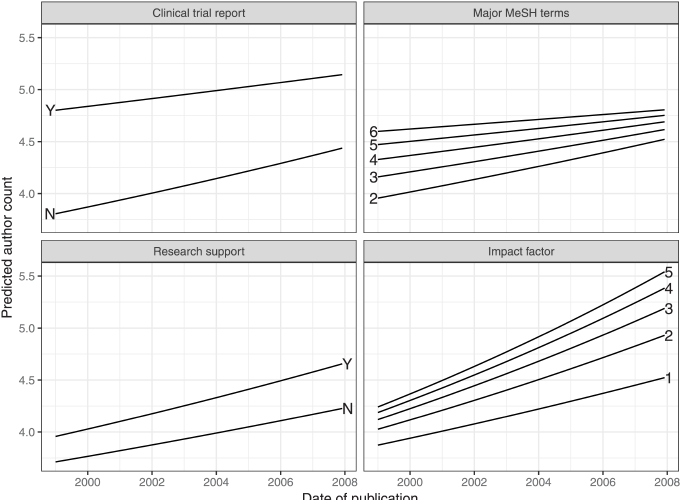 Background: Investigations into the factors behind coauthorship growth in biomedical research have mostly focused on specific disciplines or journals, and have rarely controlled for factors in combination or considered changes in their effects over time. Observers often attribute the growth to the increasing complexity or competition (or both) of research practices, but few attempts have been made to parse the contributions of these two likely causes.

Objectives: We aimed to assess the effects of complexity and competition on the incidence and growth of coauthorship, using a sample of the biomedical literature spanning multiple journals and disciplines.

Methods: Article-level bibliographic data from PubMed were combined with publicly available bibliometric data from Web of Science and SCImago over the years 1999–2007. We selected four predictors of coauthorship were selected, two (study type, topical scope of the study) associated with complexity and two (financial support for the project, popularity of the publishing journal) associated with competition. A negative binomial regression model was used to estimate the effects of each predictor on coauthorship incidence and growth. A second, mixed-effect model included the journal as a random effect.

Results: Coauthorship increased at about one author per article per decade. Clinical trials, supported research, and research of broader scope produced articles with more authors, while review articles credited fewer; and more popular journals published higher-authorship articles. Incidence and growth rates varied widely across journals and were themselves uncorrelated. Most effects remained statistically discernible after controlling for the publishing journal. The effects of complexity-associated factors held constant or diminished over time, while competition-related effects strengthened. These trends were similar in size but not discernible from subject-specific subdata.